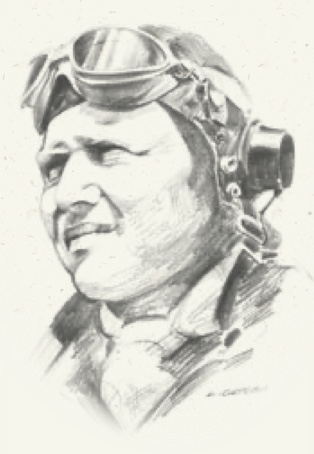 Resigned from the Navy and joined General Clair Chennault’s (enshrined 1972) Flying Tigers in 1941 to defend China from Japan. They were chased from one location to another by Japanese air and ground forces, but Hill and the Flying Tigers took to the air again and again to devastate the Japanese air armadas.

Destroyed 12 Japanese aircraft in an eight month period with the Flying Tigers.

Accepted a promotion to major in the Army Air Corps after the United States entered the war and the Flying Tigers were deactivated. However, he remained in China to activate the 75th Fighter Squadron and later to command the 23rd Fighter Group.

First pilot to down a Japanese Zero aircraft with a P-51 and destroyed more than 18 enemy aircraft which placed him among the top American fighter aces.

Commanded the 412th Fighter Group, the first jet unit in the Army Air Forces. The group flew the Bell XP-59 and later the Lockheed P-80.

Joined the Air National Guard and became the youngest brigadier general in the history of that service.