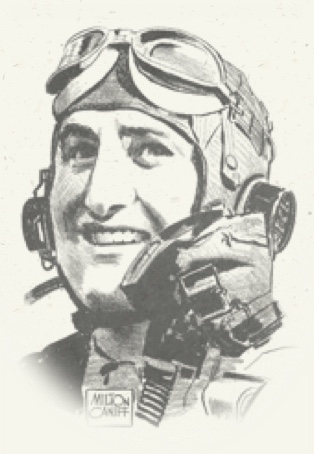 Stationed in Hawaii in 1941 where he was one of the few Americans to get airborne during the Pearl Harbor attack.

Assigned to the Royal Air Force’s 315th Fighter Squadron comprised of Polish pilots to learn its combat tactics and teach them to American pilots arriving in Europe.

Joined Hubert Zemke’s Wolfpack, the 56th Fighter Group, where he commanded the 61st Fighter Squadron and became the leading American ace in Europe with 28 victories in 17 months.

Earned a leave back to the States after reaching 30 total victories, but Gabreski volunteered to complete “just one more mission.” It was during this mission that he was shot down and captured by the Nazis. He was imprisoned at Stalag Luft I until it was liberated by Soviet troops in March, 1945.

Took command of the 51st Fighter-Interceptor Group during the Korean War, where he introduced the concepts of a flight of four and hot takeoffs to increase combat effectiveness over targets. These innovations were highly successful and enabled his Wing to attain a 14 to 1 kill ratio.

Left the Air Force in 1967, ending a brilliant military career with 34.5 air victories and nearly every military air honor.

Joined the Grumman Aerospace Corporation, serving in Public Relations and Customer Relations before becoming assistant to the corporation’s president.