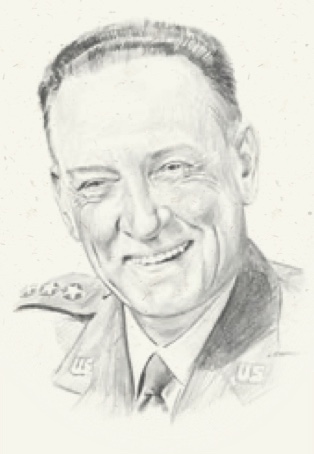 Thomas Dresser White was born on August 6, 1901, in Walker, Minnesota, to Katherine and John Chanler White, a bishop with the Episcopal Church. At age 16, Tommy graduated from St. Johns Military Academy in Delafield, Wisconsin and received an appointment to the United States Military Academy at West Point. He graduated on July 2, 1920, with a Bachelor of Science degree and promptly entered the Infantry School at Fort Benning, Georgia, graduating the following July.

Tom served three years in the Panama Canal Zone before transferring to the Air Service in September 1924. One year later, he won his wings at Brooks and Kelly Fields, Texas. Assigned to the 99th Observation Squadron in Washington, D.C., he enrolled at Georgetown University to study Chinese. During this time he met Rebekah Blaine Lipscomb at her debutante ball, and the pair were married in May of 1927. When the military discovered Tom’s aptitude for learning foreign languages, they sent him to Peking, where he compiled the “English-Chinese Vocabulary of Aeronautical Terms.” He kept his flying skills up-to-date in China by flying with the Marine Corps, and honed his skills of observation by reporting on Chiang Kai-shek’s civil war against the communists. In December of 1930, still in China, the White’s welcomed daughter Rebecca Anne into the world.

From 1934 to ’37, his keen, discerning eyes and mastery of language earned Tom assistant military attaché assignments to Russia, Italy and Greece. After attending Air Corps Tactical School followed by Command and General Staff School, Tom was assigned to the Office of the Chief of the Air Corps, serving as chief of the Intelligence Section. But by 1940, he returned to attaché duty, this time in Brazil. Following the outbreak of WWII, Tom returned stateside, serving as the Assistant Chief of Staff for Operations and then Chief of Staff of the Third Air Force at Tampa, Florida, where he was promoted to Brigadier General.

In January 1944, he was reassigned to Army Air Forces Headquarters where, as the Assistant Air Staff for Intelligence, he helped formulate plans for the D-Day invasion. Tom’s repeated requests for combat duty were finally honored in September 1944. Assigned Deputy Commander of the 13th Air Force, he took part in the New Guinea, Southern Philippines and Borneo campaigns, adding new languages along the way. Tom assumed command of the 7th Air Force in the Marianas in June 1945 and led it island hopping to Okinawa, playing an important role in bringing about Japan’s surrender. In January 1946 Tom and the 7th Air Force returned to Hawaii. By October he was serving as the chief of staff of the Pacific Air Command in Tokyo and a year later commanded the 5th Air Force in Japan.

Tom returned to the states in 1948 to serve as director of Legislation and Liaison. After promotion to Lieutenant General in 1951, he held a succession of top-level posts at Air Force Headquarters. On June 30, 1953, Tom earned his fourth star, and was designated Vice Chief of Staff. He became Chief of Staff of the Air Force on July 1, 1957. Facing the spectre of atomic aggression at the height of the Cold War, Tom’s key challenge was to integrate the newest technology, missiles and nuclear weapons into a cohesive, deterrent force. He advocated an integrated system he called a “mixed force,” including strategic missiles, bombers, tactical aircraft, reconnaissance, space systems, cargo aircraft and improvements to bases and communications. Tom also urged leaders to consider air and space as a single medium, which he and others dubbed “aerospace.” Molding all these tools and concepts together in the 1950s resulted in much of the effective Cold War force structure of the United States Air Force.

As an avid outdoorsman and environmentalist, Tom was also uniquely ahead of his time, writing, “Part of the defense job is the safeguarding of the land, timber and waters, the fish and wildlife, the priceless natural resources which make this country of ours worth defending.” After a military career spanning over 40 years, Tom retired as Air Force Chief of Staff in June of 1961. He passed away on December 22, 1965.

The National Aviation Hall of Fame is proud to recognize General Thomas Dresser White for his contributions to the development of our modern Air Force, to the preservation of peace, and to the defense of freedom.