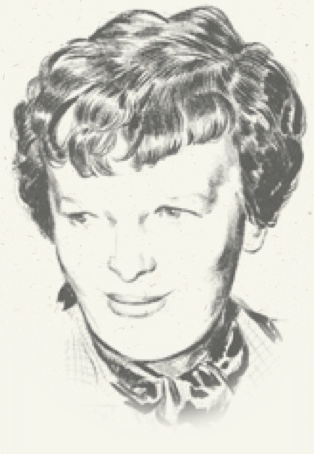 “Courage is the price that life exacts for granting peace with yourself.” These are the words of Amelia Earhart, one of the world’s most celebrated aviators, a woman who broke records and charted new waters. Her insistence of being her own person, while fighting for causes larger than herself, continues to command our respect and fuel our dreams.

In1932, she was the first woman to fly solo across the Atlantic Ocean. Amelia paved the way for the thousands of women in aviation who followed her, from Air Force pilots, to captains on commercial planes, to women astronauts traveling in space. Amelia will be forever 39 …

“Women must try to do things as men have tried. When they fail, their failure must be but a challenge to others.”

Amelia Earhart spoke those words as she embarked on what would be her last flight—the flight around the world at the equator on which she was lost. Today, we still don’t know what happened to her. But her memory not only lives on, she is by far the most famous woman who ever stepped into and flew an airplane.

Flying became her life. “You haven’t seen a tree until you have seen its shadow from the sky.”

Born in 1897 in her grandparents’ home on the banks of the Missouri River in Atchison, Kansas, Amelia dabbled in nursing and social work and learned to fly at age 23. Her instructor was a rare creature indeed in those days, a woman, Neta Snook. In 1928 Amelia was the first woman to cross the Atlantic Ocean in an airplane –as a passenger. The acclaim she gained from that flight when she was, in her words, no more than a sack of potatoes –translated as extra weight –inspired her to earn the accolades on her own. Four years later she flew the Atlantic solo –the first woman to do so. From then on, her fame was assured and several aviation firsts followed.

Amelia was one of the first celebrities to endorse products. She helped design Amelia Earhart luggage, which is still being sold today.

She married wealthy publisher George Palmer Putnam, turned out to be an exceptional writer and she penned several books about her flying adventures and about her life—all published by her husband. She became friends with Eleanor Roosevelt—the wife of the President. She took the First Lady flying over Washington, D.C. one night with the help of Eastern Airlines, after which Mrs. Roosevelt asked Amelia to teach her how to fly, but the President vetoed the idea.

With several other well-known women pilots including Louise Thaden and Ruth Nichols, she founded the Ninety-Nines, the international organization for women pilots and served as its first president. She worked with Purdue University to inspire women to look at aviation and engineering as a career and the school helped sponsor her flying laboratory—her twin engine Lockheed Electra, the plane in which she eventually was lost.

Amelia and her navigator Fred Noonan set out on their fateful flight around the world in June 1937. After departing Lae, New Guinea for Howland Island, they were never seen again. The U.S. Coast Guard lost contact with the plane. A final message was received on July 2, at 8:45 a.m. That was 70 years ago, but Amelia lives on in her legend.

“Courage is the price that life exacts for granting peace with yourself.”