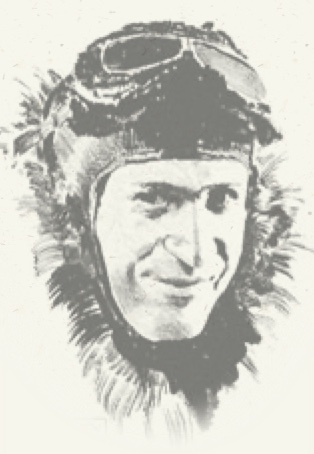 Born in the small rural community of Hatton, North Dakota, Eielson went on to bring aviation to the most remote areas of the globe. After earning his wings at March Field in 1919, he received an honorable discharge from the service and returned to the University of North Dakota to complete a law degree.

Eielson first traveled to Alaska in 1923 to teach high school. However when area businessmen learned of his pilot skills, they bought him a war-surplus “Jenny” and jointly formed the Fairbanks Airplane Corporation. In these first commercial flights in Alaska, Eielson took passengers for joyrides, flew machinery, passengers and doctors into remote camps and flew out expectant mothers and sick miners. By demonstrating the economic advantage and reliability of the airplane in the Arctic, he was awarded a government contract and became the first to fly the airmail in Alaska.

In 1926, Eielson joined the Detroit News-Wilkins Arctic Expedition and became the first man to fly over the Arctic Ocean and later to land there. Subsequently, his successful and internationally acclaimed flight over the North Polar Region in 1928 earned him the Distinguished Flying Cross and the Harmon Trophy. Also, that same year, he became the first man to fly over both Polar Regions of the world as pilot of the Wilkins-Hearst Antarctic Expedition.

Eielson returned to the U.S. in 1929 and was promptly named Vice President and General Manager of Alaska Airways to help serve the growing needs of the territory. That same year, he was killed in a tragic air crash while enroute to rescue passengers from an ice-bound ship in the Bering Sea. Throughout his life, he recognized the importance of bringing aviation to the sparsely populated regions of the world to better serve the needs of his fellow man.