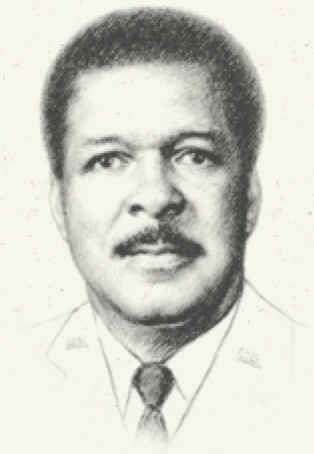 Earned his commission in 1943 as a Second Lieutenant and became one of the famed Tuskegee Airmen.

Aided in the desegregation of military facilities after 100 black officers, including Lt. James, went into custody for refusing to sign a directive that legitimized separate facilities for black and white officers. Lt. James acted as a courier between the arrested airmen and the outside world during this incident. The resulting negotiations prompted Secretary of War Henry Stimson to declare that military personnel could not be separated based on race.

Received the Distinguished Flying Cross for valor when he and a fellow pilot experienced a flame-out in a T-33. The pilot in the front seat was knocked unconscious by the crash, but James rescued them just before the plane burst into flames.

Flew 101 combat missions in the F-51 and F-80 aircraft during the Korean War and was awarded the Distinguished Flying Cross in 1950 for leading a flight of F-51 Mustangs during a close air support mission in support of U.N. troops.

Became Vice Wing Commander of the Eighth Tactical Fighter Wing in Thailand under the command of Colonel Robin Olds (enshrined 2001).

Flew 78 combat missions over North Vietnam. On one mission he led a flight in the Bolo MIG sweep in which seven MIG 21s were destroyed, the highest total MIG kill of any mission during the war.

Assumed command of Wheelus Air Force Base in Libya in the wake of the infamous Muammar Khadafy’s coup.