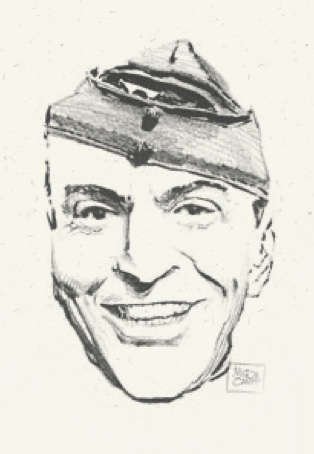 Was one of the nation’s leading race car drivers and served as General Pershing’s official chauffeur during World War I until he was transferred to the AEF’s Aviation Instruction Center.

Assigned to the newly established 94th Aero Squadron, the Hat-in-the-Ring Squadron, in 1918.

Shot down his first enemy plane in a spectacular fight while flying with James Hall over the Montsec area. For his bravery in action, the French awarded him the Croix de Guerre with Palm.

Placed in command of the 94th, after Raoul Lufberry (enshrined 1998) was killed in action.

Achieved his first double-kill in 1918 when he single-handedly attacked a flight of five Fokkers and two LVG’s. For this action, he was awarded the Congressional Medal of Honor in 1930.

Considered America’s “Ace of Aces” for downing 22 airplanes and four balloons during World War I.

Awarded the Distinguished Service Cross with nine Oak Leaves and the Mackay Trophy, in addition to the Legion of Honor Medal by the French government.

Toured air bases around the world to evaluate their effectiveness during World War II. While touring the South Pacific, he and his crew overshot its tiny island landing strip, got lost, and ran out of fuel. The crew ditched the plane safely on the water, but the emergency food rations and water supply were left behind in the sinking plane. They were found three weeks later 400 miles from where their plane went down. He received the Medal of Merit for his war services.