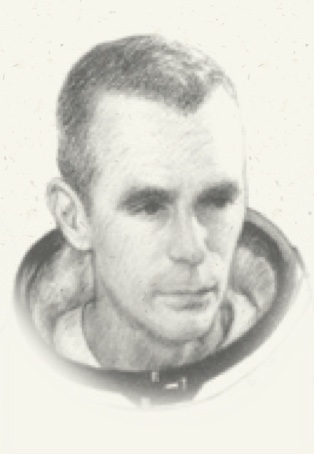 In October 1963, NASA selected him for the astronaut program.

First ventured into space as pilot of Gemini 9. His then record two hours, ten minute spacewalk took place while his spacecraft completed one full orbit of the Earth.

Served as the lunar module pilot for Apollo 10 in May of 1969 and flew the module, Snoopy, within ten miles of the moon’s surface.

On December 7th, 1972, flew as spacecraft commander of the Apollo 17 mission. Over a three-day period Cernan and Dr. Harrison H. Schmitt spent more than 22 hours walking on the moon and, with the battery-powered rover, explored 21 miles of the moon’s surface. They deployed a small nuclear-powered science station and collected 250 pounds of rock and soil samples.

Logged over 566 hours in space and spent more than 73 hours on the moon.

Involved with the Apollo-Soyuz test project, a historic joint venture between the United States and the Soviet Union.

In June 1976, Cernan resigned from NASA and retired from the Navy as a Captain.

In 1981 he became the President of the Cernan Corporation, a space-related technology and marketing consulting firm.