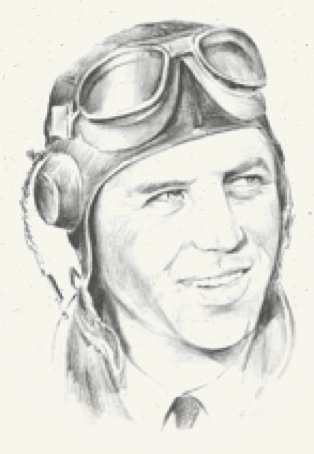 Assigned to the 36th Fighter Squadron at Langley Field, Virginia where he was logging 20-30 hours a month testing P-40s at Wright Field and flying in the Cleveland Air Races.

Transferred to the American Embassy in Moscow in 1941 where he served as Assistant Military Attaché and trained Soviet pilots in British P-40s.

Credited with several combat tactical innovations, including the Zemke Fan, as leader of the 56th Fighter Group (better known as Zemke’s Wolfpack). By November 1943, the 56th had produced six aces, including Zemke. He would eventually score 19.5 aerial victories, and the Wolfpack would end the war with 992.5 confirmed kills, more than any other Eighth Air Force fighter group.

Flew over Germany into foul weather in 1944 on his last mission where he had to bail out of the plane. He eluded capture for several days but was eventually caught by the German army.

Interned at Stalag Luft I where he was responsible for nearly 9,000 men as the senior Allied officer. With Germany’s defeat imminent, Zemke was able to convince the Nazis to turn the camp over to the prisoners before the Soviets arrived. He then prodded the Russians to turn over American and British prisoners to nearby American forces, rather than taking them to the Soviet Union.

Remained in Europe following World War II to search for missing American prisoners of war and return them home.

Served as President of the Air Force’s Air War College, Secretary of NORAD, and Commander of the Reno Air Defense Sector.