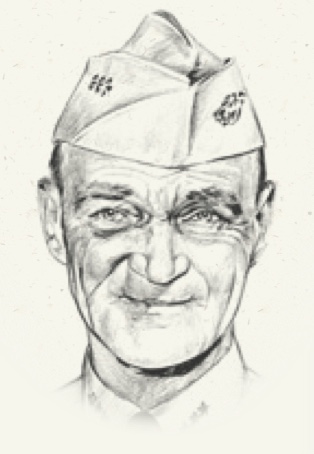 Reported for aviation training at Naval Aeronautic Station (NAS) Pensacola, on board USS North Carolina, which was one of the first Navy ships to carry an airplane. Mitscher received a designation Naval Aviator No. 33 on June 2nd, 1916.

Piloted one of the unsuccessful NC seaplanes attempting the first airborne transatlantic crossing in 1919.

Made the first successful take off and landing on the USS Saratoga in 1928.

Commanded the USS Hornet, when the carrier launched the first successful bombing mission of Japan’s home islands in 1942.

Went to Guadalcanal as Commander Air, Solomon Islands in 1943 in charge of the Navy, Army, Marine and Royal New Zealand Air Force units.

Developed the idea of operating aircraft carriers in groups, or “task forces,” a strategy that drastically improved the effectiveness of carrier warfare.