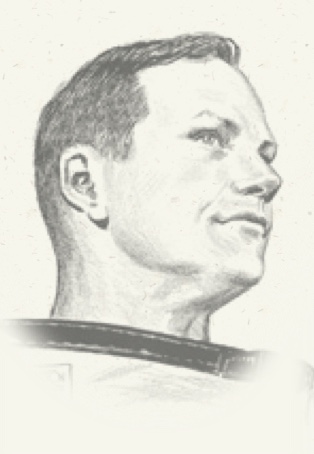 World famous for being the first man to step foot on the moon and his subsequent coining of the phrase, “One small step for man, one giant leap for mankind,” Neil Armstrong had an uncanny ability for maintaining his composure in high-pressure situations. In fact, his historical moonwalk might not have taken place had it not been for his calm demeanor. Just before landing his Apollo 11’s Eagle lunar module on the moon, Armstrong noticed that it was headed straight for a boulder field. He quickly switched off the vessel’s auto pilot feature and assumed its manual controls. After guiding Eagle to a safe landing just seconds before it ran out of fuel, he radioed mission control and calmly stated, “Houston, Tranquility Base here, the Eagle has landed.”

Armstrong was born in Wapakoneta, Ohio on August 5th, 1930 to Stephen and Viola Armstrong. His family also included a brother, Dean, and a sister, June. Armstrong’s father was an auditor for the State of Ohio. Neil took his first airplane ride at age six in a Ford Tri-motor, sparking his interest in flying. At age 15, he started to take flying lessons in a yellow Aeronca Champion funded by working old jobs around town. He earned his pilot license on his 16th birthday, before he had earned his drivers license. Neil graduated from Blume High School in 1947 and the yearbook quote on Armstrong was, “He thinks, he acts, ‘tis done”. Armstrong’s future proved undoubtedly the truth of this quote.

Armstrong served as a Naval Aviator from 1949 to 1952. After completing a Bachelor of Science degree in Aeronautical Engineering from Purdue University in 1955, he joined the National Advisory Committee for Aeronautics (NACA) Lewis Resarch Center in Cleveland, Ohio. The next 17 years he spent as an (NACA/NASA) engineer, experimental test pilot and astronaut. There he helped to flight test America’s new high speed aircraft, including the rocket-powered X-1, the first to break the sound barrier, and prototypes of the F-104 jet fighter and B-47 bomber. Soon he received an assignment to the X-15 rocket plane project and made his first flight after being dropped from a B-52. He also helped perfect a flight control system for the X-15 and used it to reach speeds approaching 4,000 miles an hour and altitudes of over 200,000 feet, the very threshold of outer space. He flew over 200 different aircraft including jets, rockets and helicopters, including the X-15.

In 1962, the National Aeronautics and Space Administration selected Armstrong as the nation’s first civilian astronaut. Armstrong was the command pilot for the Gemini 8 mission and he performed history’s first successful docking of two space vehicles in space in 1966. However, the linked spacecraft tumbled out of control and Neil had to to abort the remainder of the mission. But he returned to Earth safely, having survived mankind’s first space emergency.

Neil Armstrong had an uncanny knack for keeping his cool in stressful situations. His historical moonwalk might not have taken place had it not been for this calm demeanor. Just before landing his Apollo 11 Eagle Lunar Module on the moon, Neil noticed that it was headed straight for a boulder field. He quickly switched off the spacecraft’s auto pilot landing feature and landed manually in a safer area. After landing safely, seconds before it ran out of fuel, he radioed mission control and calmly stated, “Houston, Tranquility Base here, the Eagle has landed.” In all Armstrong and his Apollo 11 crew traveled nearly one million miles in an eight day mission, that stands as the most remarkable achievements in human history.

Armstrong, the first man to walk on the moon on July 20, 1969 died August 25, 2012 at the age of 82 of complications from cardiovascular procedures.  He was buried at sea September 14, 2012 during a ceremony aboard the USS Philippine Sea.  Armstrong  looked at himself as a representative for all the thousands of people who had made the moon flight possible—the engineers, the designers, and the people in the launch crew and control center.  “Was he a recluse?” – NO, he just didn’t seek out the spot light.