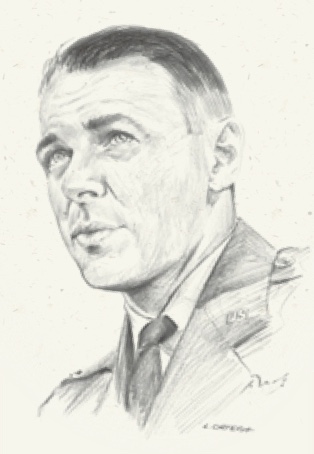 In July 1962, White was at the controls of the sleek rocket powered X-15, the fastest aircraft ever built. At 59 miles above the earth, there was no sensation of speed but a distinct feeling of altitude. The sky was almost black, and White saw the curvature of the earth from San Francisco Bay all the way to Mexico. One of many record-setting X-15 flights, this one earned White his astronaut wings – the first to do so in a fixed wing aircraft.

The 355th Fighter Group, which had been newly-equipped with high-powered P-51 Mustang, flew bomber escort missions over Germany. After the Normandy landings and the Allied breakout at St. Lo, Lt. White and his comrades flew ground attack missions to cut enemy supply lines and carried out fighter sweeps against the Luftwaffe. In February 1945, he was shot down by heavy anti-aircraft fire over Germany during his 52nd combat mission. He was captured, and remained a prisoner until the camp was liberated two months later.

Following the victory, White returned to the United States and enrolled at New York University, where he received a Bachelor of Electrical Science degree in 1951.

A reservist, White was recalled to active duty in May 1951 for the Korean War. He first served as a pilot and engineering officer at Mitchell Air Force Base. In February 1952, he was sent to Japan and assigned to the 40th Fighter Squadron as a F-80 pilot and flight commander.

Facing a crossroads at the end of the Korean War, White elected to remain on active duty and turned his attention to the advancement of scientific flight. He traveled to California to attend the Air Force Experimental Test Pilot School at Edwards Air Force Base and graduated in January 1955.

White’s destiny was to change dramatically when the joint Air Force-Navy-NASA X-15 project moved into high gear in 1958. The challenge was to explore the problems connected with manned flight beyond the earth’s atmosphere. The solution was the X-15, North American Aviation’s futuristic rocket-powered research aircraft, launched from a B-52.

Now a Major, White was designated the Air Force’s primary pilot for the X-15 program. He made his first X-15 flight on April 15, 1960. Four months later, he took the experimental craft to an altitude of 136,000 feet.

After the craft’s new and improved 57,000 pound thrust engine was installed, White flew it to a speed of 2,275 mph in February 1961, setting an unofficial world speed record. Over the next eight months, he became the first human to fly at Mach 4 and then at Mach 5. In November, White reached a speed of 4,093 mph. This was 93 mph more than the plane was designed to achieve, and made White the first human to fly a winged craft six times faster than the speed of sound. Following this feat, he took the X-15 to the record-setting altitude of more than 59 miles above the earth’s surface qualifying him for astronaut wings. It also earned White perhaps the most meaningful award to – the Society of Experimental Test Pilot’s Iven C. Kincheloe Award. “He also received the Harmon International Trophy and the Collier Trophy, both presented by the President in the White House.”

In 1966, White received a Master of Science degree in business administration from The George Washington University. An assignment to the Air Force Systems Command followed, as Chief of the Tactical Systems Office, F-111 Systems Program, at Wright-Patterson Air Force Base in Dayton, Ohio.

For the third time in White’s career, war intervened. In May, 1967, he went to Southeast Asia as Deputy Commander for Operations of the 355th Tactical Fighter Wing, stationed in Thailand. He flew 70 combat missions over North Vietnam flying the F-105 Thunderchief. White was then transferred to Seventh Air Force Headquarters at Tan Son Nhut Airfield, Republic of Vietnam, where he served as Chief of the Attack Division in the Directorate of Combat Operations.

In June 1968, White was back into the world of research and development, at the Air Force Systems Command at Wright-Patterson. Now a colonel, he was named Director of the Aeronautical Systems Division’s F-15 Systems Program Office.

Colonel White’s next assignment brought him back to Edwards. Designated a selectee for the rank of Brigadier General, the 46-year-old officer assumed command of the Air Force Flight Test Center in July 1970.

In November of 1972, he assumed the duties of Commandant, Air Force Reserve Officer’s Training Corps.

He won his second star in February 1975, and, in March, became Chief of Staff of the Fourth Allied Tactical Air Force.

White retired from active duty as a Major General in February 1981. For his service action in combat, White earned the Air Force Cross, and four Silver Stars with three clusters.

For serving his country and dramatically expanding our knowledge of flight, Robert M. White has earned his place in the National Aviation Hall of Fame.