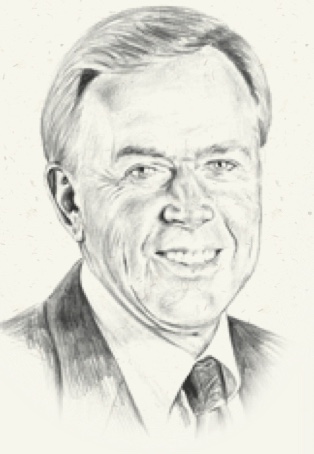 Accomplished commercial, instrument-rated pilot with more than 17,000 hours of flight time and type rated in all models of the Cessna Citation business jet.

Served as President and Chief Executive Officer of Grumman American Aviation Corporation in Cleveland, Ohio from 1966 to 1974.

Led Cessna from 1975 to 2003 as Chairman and Chief Executive Officer and was named Chairman Emeritus in 2005.

Led in the passage of the 1994 General Aviation Revitalization Act (GARA) that limited aircraft liability that had crippled the general aviation industry.

Received the George S. Dively Award for Corporate Public Initiative in 1991 from Harvard University which was presented to him for creating Cessna’s 21st Street Training Program, a comprehensive academic, personal and on-site vocational skills training program for Wichita’s inner-city residents, with jobs guaranteed to those who complete the program.

Played a key role in the development of the “Be A Pilot” program that resulted in tens of thousands of new pilots and contributed more than $200 million to the economy.

Served on three Presidential commissions and was appointed by Secretary of Transportation Norm Mineta to the FAA’s Management Advisory Council in 2004.