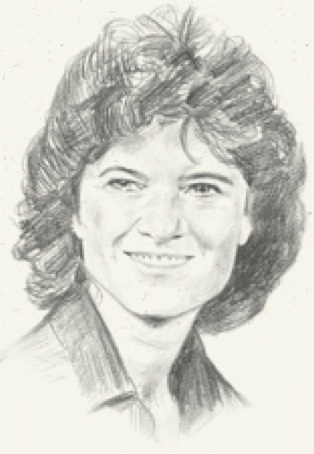 Was one of only 6 women accepted in the 8th class of Astronauts.

Learned to fly a T-38 jet and participated in the design of the remote mechanical manipulator arm during astronaut training.

Became the first American woman in space aboard STS-7, Challenger, in 1983 where she served as a flight engineer and mission specialist. The remote manipulator arm was used to deploy and retrieve a satellite that flew in formation with the space shuttle for part of the mission.

Returned to space on Challenger STS-41G in 1984 where she operated the remote manipulator arm to deploy a radiation-study satellite and to stow the antenna for the shuttle imaging radar system.

Assigned to NASA headquarters as Special Assistant to the Administrator for long range and strategic planning. She was responsible for the creation of NASA’s “Office of Exploration” and produced a report on the future of the space program. The effort became known as the “Ride Report.”

Was the only person to serve on both the Challenger and Columbia accident investigation boards.

Received the Jefferson Award for Public Service and has twice been awarded the National Spaceflight Medal.

Founded Sally Ride Science in 2001, a company which encourages girls to pursue careers in technical fields.